[I just changed the title per Jacqueline’s request. Since the bricks are actually interlocking blocks, and this is what sets Zoma apart from other brickyards, she asked me to change the word “brickyard” to “blockyard.”]

I tried to post this last night, but at midnight my internet cuts off, and it seems that I can’t get back on for about twenty minutes. At least that’s the way it was the night before. Last night, I was tired and I gave up ten minutes in and went to sleep. The way many people get internet here–and this is the case for me– is that you have a USB stick that provides you internet through the cell phone network. You get a certain amount of data per day, and it resets at midnight. I think I should be able to get back on at 12:01 am, but that doesn’t seem to be the case in actuality.

The picture of me above was taken in front of the little mini house that Olivier put up to advertise the Zoma blockyard on the main road. As you’ll read below, we walked over to the blockyard yesterday.

Happy Saturday to all!

Today I woke up… and I didn’t have a class to go teach! What a joy! As much as I have loved giving the trainings each morning, I loved having the freedom to lie in bed for a while and know that I didn’t have to have a clear plan for the day.

I wasn’t sure what the day would bring. Of course, this has been true every day I’ve been here, but without a class to teach in the morning, it was even more so. After I did my morning yoga, Jacqueline and I talked and agreed that we would walk to the Zoma brickyard after breakfast, since it looked like we were going to have a dry morning.

I want to tell you about this brickyard, in case you don’t already know about it. Zoma is a truly brilliant element to the Aumazo project, and one thing that differentiates Aumazo from any other project of its case—particularly a project that has, as yet, received no grants at all. (Can you believe the incredible work that’s happening on a project begun by one woman in her kitchen eleven years ago, and which has received no actual funding yet?) Jacqueline realized as she was starting to build the school that 1) the best building materials she could use for her school would be bricks built out of the clay that’s everywhere around; 2) there is a brick-making machine made in South Africa that makes interlocking blocks (that don’t need mortar) out of the clay; and 3) if she could get a construction business going based on a blockyard, she would have a way to pay the teachers and make sure the school was self-sustaining well after any grant moneys were to run out.

For the past three years, Olivier has run the blockyard and the construction company with the help of a few capable people here. The houses they build are just beautiful. The bricks are gorgeous. You can see in the pictures below the contrast between what Zoma is building and the other structures around.

On the left, a brick house (with mortar) that’s being built by someone else. On the right, the Zoma office/model house.

The clothes belong to a neighbor who did wash. The structure above is in cinderblock and much less attractive than the Zoma house.

You can visit zomabuild.com to learn more about what they’re doing. I’ve known about Zoma since I first heard Jacqueline speak, and I was bowled over to be able to actually be there today.

We had a full day yesterday beyond what we did at the brickyard which included a visit in the evening to Jacqueline’s friends Patrick and Eveline. Patrick is the Sous-Préfet of Banja, a neighboring village where the Père Sylvestre was formerly the parish priest. Patrick and Eveline are fabulous people who received us in their home with great warmth. They are both anglophone (though they both speak French as well), and we spent the evening speaking English with them and their children. Eveline is a chemistry teacher over at the Collège Saint-Paul and also an administrator at a government school. She is working toward becoming a principal, but she says she will never leave the classroom because teaching is so important to her. In fact, the reason she teaches over at Saint-Paul is because at her school, chemistry isn’t offered beyond the more basic levels, and it’s important to her to be able to teach higher levels in her field, and keep her knowledge fresh, than to have the time off she would otherwise have. We hope that she will be able to participate in our next round of training–maybe next summer.

This morning (Sunday) we plan to go to Bankondji to case the joint, get set up a bit for tomorrow morning, and also walk to the school site. We had been hoping to go yesterday after our brickyard visit, but it started to rain, and it never really cleared up. This is the rainy season after all, so we have big, torrential rainstorms almost every day, but then we also have periods in the day when it’s dry and lovely. 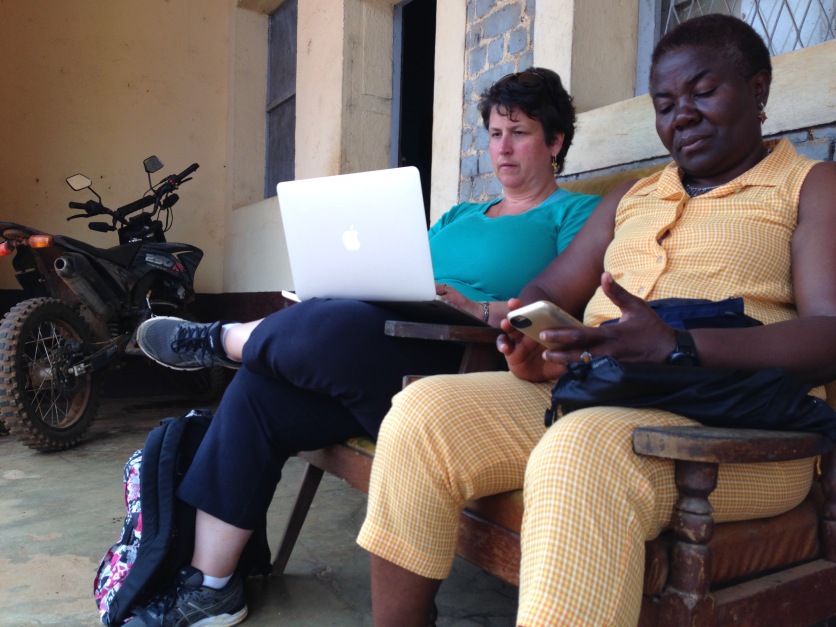 Checking in with the bigger world after our walk to the brickyard.