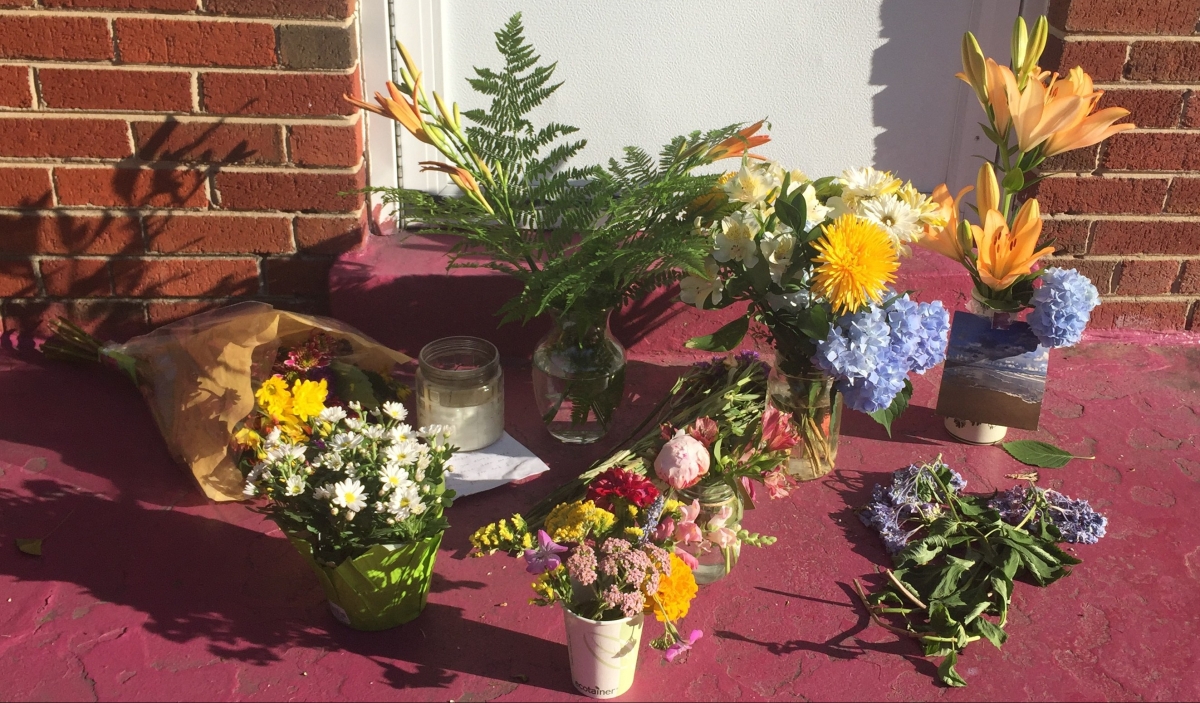 I’ve just learned that a GoFundMe page has been created by SURJ (Standing Up for Racial Justice) to help Rob’s out-of-town family with funeral expenses: https://www.gofundme.com/robert-white-killed-by-police. Please donate.

His name was Rob. I didn’t know his full name until I read that he was dead.

We met about a year and a half ago, when I started working from home.

He was always walking.

Sometimes I saw him at the YMCA or in downtown Silver Spring. Or at the library when I was tutoring or looking for a good book to read. He always walked. He was very purposeful, always heading to his destination—but he was always happy to smile and say hello. We’d talk about the weather, or about the movies he’d borrowed from the library, or we’d just wave and give a friendly nod.

One day I was walking to a friend’s house nearby and I saw him standing on his porch. I was so glad to see that he had somewhere to live. With all the walking he did at all times of day—which made me think he did not have a job or a comfortable place to go—and his somewhat disheveled appearance, I’d wondered if he were homeless. But he wasn’t. He lived in a solid brick house just across the park. I was truly delighted. The world suddenly seemed a slightly kinder place to me, a place where someone who spent his time walking rather than working in an office had good shelter. (see end for note about this)

On Monday, Rob was walking through some townhouses near a walking path down at the bottom of my neighborhood. It’s a great cut-through to get to the hiker-biker trail, and my kids, my husband, and I all use it when we go for a bike ride or take the dog for a long walk. It’s also the prettiest way to walk between our house and downtown Silver Spring. There’s a well-trodden path at the end of the neighborhood street that joins the townhouse community, and the two streets in the small group of townhouses are wide and clean and well kept. It’s a lovely walk.

On Monday, when Rob was walking through that very lovely area, the police arrived to investigate a “suspicious person.”

Rob was walking. Just as I do. Just as my husband does.

But Rob was “suspicious.” It won’t be a surprise to learn that my husband and I are white, and that Rob is black.

Rob reacted angrily when the officer tried to speak with him, and he attacked the officer, but he did not have a weapon. He was unarmed.

He is now dead.

I have heard reports that he was shot four times, or six times, or eight times. (The press release by police reports that the officer’s weapon was first “discharged,” and then that “the officer fired additional rounds.”)

When I opened up The Washington Post on Wednesday morning, I read the headline: “Police say man killed by officer struck first.”*

What? This was the headline? Where was the extremely important fact that Rob was unarmed?

As I read the article that followed the headline, I observed my socialized mind trying to decide that this was all really okay and that the police were just trying to keep me safe. The suspicious person attacked the police officer; the police officer defended himself. Everything’s really okay. It’s a shame that the guy had to die, but order has been restored to the universe in some way.

This is what my mind keeps trying to do. It keeps trying to make this be okay, in part because this type of thing actually happens with great regularity. A black man is identified as suspicious. The police arrive. The “suspicious person” reacts with fear and anger to police. The police react with deadly force. These stories are in the paper daily.

But that thought pattern gets me nowhere because it isn’t okay. Order hasn’t been restored. Rob was my neighbor. We said hello to each other almost daily. My embodied being will not allow my socialized mind to fully take the lead and dismiss this. I feel sick to my stomach, my chest aches, my throat is tight, my mouth is dry, and it’s hard for me to breathe.

I am deeply uncomfortable. Thanks be to God for that! Because if change is to come, it’s going to require that we white people experience in our embodied beings that the status quo is not comfortable. The status quo is a frightening and dangerous set-up in which the dice are loaded against our friends and neighbors.

If you are a white person who wants to work on shifting your thinking, don’t put it off. White people who don’t understand the impact of race are dangerous. Being unaware does not make us innocent. We can never fully undo our socialization, but we can become aware of the scripts we are enacting each time we open our mouths to talk about racially-infused topics (which are legion in our society). Start reading. Some books that have had a huge impact on me are: Robin DiAngelo’s What Does It Mean to Be White; Ijeoma Oluo’s So You Want to Talk About Race;  Debby Irving’s Waking Up White; and, of course, Ta-Nehisi Coates’ beautiful Between the World and Me. If you’d prefer to start with a video, I’d recommend Robin DiAngelo’s “Deconstructing White Privilege” —22 minutes on Youtube.

Robert Lawrence White—known as Robbie to those in the neighborhood who have known him longer than I have—grew up in that house across the park from me. Like me, he went to Montgomery Blair High School back when it was still on Wayne Ave.

My neighbor Joel told me that his kids grew up playing basketball in the park with Rob. Rob was a bit odd, but he was part of the extended family of the neighborhood, and he was loved. My neighbor Regina, whose son also grew up with Rob, told me that Rob was the son of Reverend Robert Lee White and Mrs. Marie White; Mrs. White died in 2003 and Rev. White passed away in November of 2016.

I miss him each time I glance up the sidewalk to see who is coming and get ready to give Rob a wave. Just a few days ago, I was saying hello. Now, when I lie in savasana—corpse pose—at the end of a yoga class, I am haunted by how Rob’s final resting pose was on one of our neighborhood streets, his body ripped through with bullets.

*The headline has now been modified online to read “Police identify officer who fatally shot unarmed man during what they call ‘combative’ encounter.”

(added 6/16/18) A friend has pointed out to me that my assumption that Rob was homeless is likely a manifestation of negative attribution bias. I have conscious reasons I can point to for why I thought he might be homeless—but I cannot escape the reality that the implicit bias that made him first seem suspicious and then be gunned down is present in myself and in how I first saw him. I’m writing this note as a way of making transparent my own process, as it is clear to me that it is only by taking feedback and being transparent with others that we have any chance of making any shift.

24 thoughts on “My neighbor was murdered on Monday”